Spam = any unwanted, unsolicited, irrelevant, or inappropriate messages sent on the Internet to a large number of users.

By law, all mass mailing must contain:
Additionally, by law:

Failure to obey can result in fines up to $11,000.  Under the new law, states are also given the right to enforce much of their own spam legislation.

Facebook has a lot of fake profiles on their social network, unlike Google that foresaw that only real profiles have any value.

If you can create as many profiles as you want as whatever you want then you get a lot of false information in your data system.  Advertisers pay to advertise to specific target markets but if those are false profiles then they get no return or sales.   Therefore it doesn't matter how many "likes" a page receives because they do not use real data.   Investors know that without the advertisers the social network can't turn the profit they expected.

On July 28 2011, Google enforced it's policy to allow only real profiles.   Yay! Google was able to use their foresight to ensure that they have the best quality social network.

"Google has enforced its policy for requiring a real name on its new social network Google+ by suspending accounts."
http://www.bbc.co.uk/news/magazine-14312047

In a article a few days ago, a Facebook spokesperson interviewed by the BBC stated,


"All of these companies have access to Facebook's analytics which allow them to see the identities of people who have liked their pages, yet this has not been flagged as an issue." News, 13 July 2012, http://www.bbc.co.uk/news/technology-18813237

LOL.  They have lots of issues besides fake profiles, flawed software and double standards.   One issue I  flagged to the Facebook legal team in July of 2011 regards their double standards for big and small business on their social network.   I requested the removal of private pages using my trademarked brand and the registration of profiles.   Unfortunately they chose to ignore the issue and reiterated to me a bunch of rules from the Help section.   Facebook continues to allow anyone who does not represent my company to use my brand and advertise on their network with my trademark.   Obviously, I would never pay to advertise my brand on their network if there was someone else using my trademarked brand. Yet, there is only one Coca-Cola!? 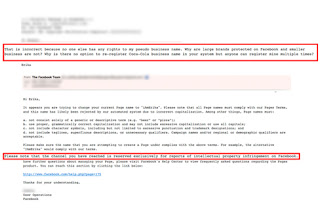 Unfortunately lots of suckers believed Facebook had the most valuable information on a social network.   Also, the people trying to make money from Facebook's data are going to be disappointed too.   Google on the other hand is steadily increasing in stock market value.  It may have something to do with "like" enforcing principles of "like" integrity and honesty.   :)