Publish any videos online of farm conditions taken as part of undercover animal activist operations is a felony punishable by years in prison.

The Animal Enterprise Terrorism Act (AETA), co-sponsored in the Senate by Senators Inhofe and Feinstein, was drafted with technical assistance from counter-terror experts at the Department of Justice and the Federal Bureau of Investigation.
https://www.feinstein.senate.gov/public/index.cfm/press-releases?ID=7929e3ca-7e9c-9af9-78e6-8049c2e67205 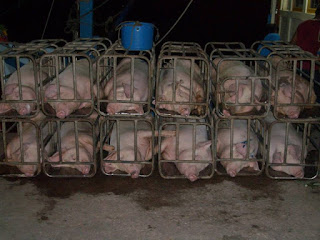 Silencing activists began long ago but in 1988 a significant document from the American Medical Association ("AMA") titled "Animal Research Action Plan" was leaked to the animal rights organization PETA. The document recommended that "the animal activist movement must be shown to be not only anti-science but also a) responsible for violent and illegal acts that endanger life and property and b) a threat to the public's freedom of choice."
The Monkey Wars, By Deborah Blum,  Page 145 - Google Books, https://books.google.com/books?isbn=0198025408, accessed 2/13/2018

Fran Trutt an animal rights supporter, on November 11, 1988, after she placed a pipe bomb at U.S. Surgical's headquarters."' Trutt was charged with attempted murder." U.S. Surgical was quick to condemn the act as "an example of growing fanaticism in the animal-rights movement."'
Hill, Michael. "United States V. Fullmer and the Animal Enterprise Terrorism Act: 'True Threats' to Advocacy." Case Western Reserve Law Review, no. 3, 2011, p. 981.


Some courts have concluded that the term "interfere" is incapable of being limited to a time, place, and manner restriction and it is, therefore, necessarily overbroad. Either way, AETA violates the First Amendment over breadth doctrine.
https://www.npr.org/sections/thetwo-way/2017/07/08/536186914/judge-overturns-utahs-ag-gag-ban-on-undercover-filming-at-farms

(2) in connection with such purpose—
(A) intentionally damages or causes the loss of any real or personal property (including animals or records) used by animal enterprise...
(B) intentionally places a person in reasonable fear...
(C) conspires or attempts to do so; shall be punished ...


This "terrorism" law is violated if one "intentionally damages or causes the loss of any real or personal property (including animals or records) used by an animal enterprise … for the purpose of damaging or interfering with" its operations. If you do that — and note that only "damage to property" but not to humans is required — then you are guilty of "domestic terrorism" under the law.
https://theintercept.com/2017/10/05/factory-farms-fbi-missing-piglets-animal-rights-glenn-greenwald/

AETA's failure to define "real or personal property" means that under well settled judicial decisions it includes good will and reduced profits. Under the plain language of the statute, an individual who videotapes or even attempts to videotape the inside of an animal enterprise for the purpose of disclosing the information to the public violates its provisions.

When an undercover activist gained access to a slaughterhouse in 2008 and videotaped footage of cows going into the kill lot so sick that they could not stand, footage which led to the recall of 143 million pounds of meat, the largest in American history, there were concerns over whether the activist would be prosecuted.


On January 18, 2018 two boys were charged with agricultural animal facilities offences for killing half a million bees at the Wild Hill Honey farm in Sioux City. They face up to 10 years in prison, fines of up to $10,000 and a felony record for life.

RESTITUTION.—An order of restitution under section 3663 of this title with respect to a violation of this section may also include restitution—
(1) for the reasonable cost of repeating any experimentation that was interrupted or invalidated as a result of the offense;
(2) for the loss of food production or farm income reasonably attributable to the offense; and
(3) for any other economic damage, including any losses or costs caused by economic disruption, resulting from the offense.


Free communication of thoughts and opinions is one of the invaluable rights of man, and every citizen may freely speak, write and print on any subject, being responsible for the abuse of that liberty (John Marshall Harlan II, Associate Justice of the Supreme Court of the United States).

In conclusion AETA's vagueness creates the appearance of infringement and the threat of prosecution has the potential to silence debate on a wide range of important public issues.  Anyone that supports animal rights activists with the intent to reveal abuse, exploitation, and the torture of animals used as commodities in agribusiness is a domestic terrorist.